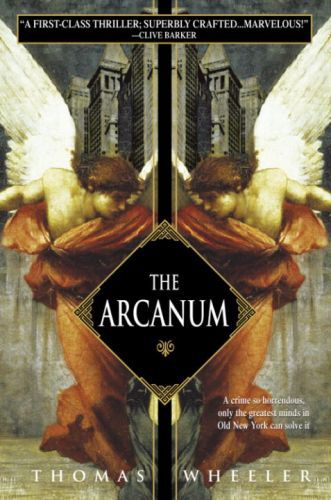 It is 1919 and the Great War has come to a close. But in the shadows of the worldyes'>#8217;s major cities, the killing has just begun. In this perilous time, as the division between order and chaos grows increasingly slim, a select group of visionaries have taken it upon themselves to ensure the safety of humanity. They are known as the Arcanum.In Londonyes'>#8217;s stormy Hyde Park, Konstantin Duvall, the Arcanumyes'>#8217;s founder, has been killed in a suspicious accident. Dismayed, the groupyes'>#8217;s longestlived member, Sir Arthur Conan Doyle, determines to avenge Duvallyes'>#8217;s deathyes'>#8212;and uncover the secret left in his wake. For the dead man possessed the worldyes'>#8217;s most powerfulyes'>#8212;now missingyes'>#8212;artifact: the Book of Enoch, the chronicle of Godyes'>#8217;s mistakes, within whose pages lie the seeds for the end of everything. From the scene of the crime, Conan Doyle embarks on a path that leads him to the sleazy underworld of New York Cityyes'>#8217;s Bowery and a series of deceptively disparateyes'>#8212;but decidedly connectedyes'>#8212;murders. And as he calls upon the scattered members of the Arcanum for aid, he also finds himself embroiled in a story of war as old as time itself. Not of a struggle between countries, but between darkness and light.Peopled with the twentieth centuryyes'>#8217;s most famousyes'>#8212;and infamousyes'>#8212;figures, here is an extraordinary tale in which the stakes go beyond he realm of humankindyes'>#8212;into the divine.From the Hardcover edition.